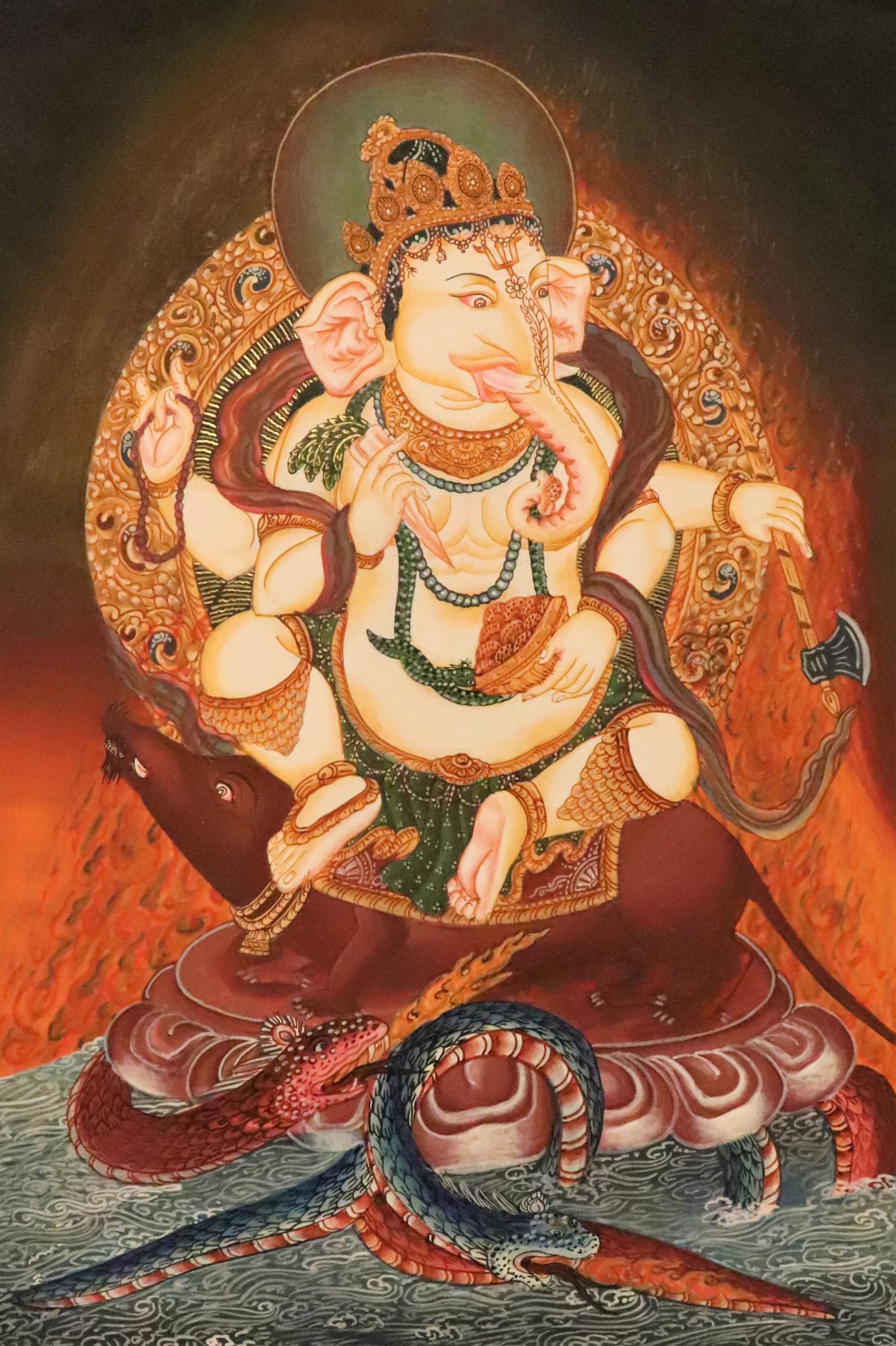 Ganesh Hindu Thangka Painting is hand painted in Nepal in Newari style. Son of Shiva and Parvati has an elephantine countenance with a curved trunk and big ears, and a huge pot-bellied body of a human being. He is the Lord of success and destroyer of evils and obstacles.

Ganesh Hindu Thangka Painting is hand painted in Nepal in Newari style. Son of Shiva and Parvati has an elephantine countenance with a curved trunk and big ears, and a huge pot-bellied body of a human being. He is the Lord of success and destroyer of evils and obstacles.

Ganesha is one of the deities best-known and most widely worshiped in the Hindu pantheon. His image is found throughout India and Nepal. Hindu sects worship him regardless of affiliations. Devotion to Ganesha is widely diffused and extends to Jains, Buddhists, and beyond India.Although he is known by many other attributes, Ganesha’s elephant head makes him particularly easy to identify. Ganesha is widely revered as the Remover of Obstacles and more generally as Lord of Beginnings and Lord of Obstacles, patron of arts and sciences, and the deva of intellect and wisdom. He is honored at the beginning of rituals and ceremonies and invoked as Patron of Letters during writing sessions. Several texts relate mythological anecdotes associated with his birth and exploits and explain his distinct iconography.

Ganesha has the head of an elephant and a big belly. This statue has four arms, which is common in depictions of Ganesha. He holds his own broken tusk in his lower-right hand and holds a delicacy, which he samples with his trunk, in his lower-left hand. The motif of Ganesha turning his trunk sharply to his left to taste a sweet in his lower-left hand is a particularly archaic feature. A more primitive statue in one of the Ellora Caves with this general form has been dated to the 7th century.[38] Details of the other hands are difficult to make out on the statue shown. In the standard configuration, Ganesha typically holds an ax or a goad in one upper arm and a noose in the other upper arm.

Ganesha is Vighneshvara or Vighnaraja, the Lord of Obstacles, both of a material and spiritual order. He is popularly worshipped as a remover of obstacles, though traditionally he also places obstacles in the path of those who need to be checked. Paul Courtright says that “his task in the divine scheme of things, his dharma, is to place and remove obstacles. It is his particular territory, the reason for his creation.”

Krishan notes that some of Ganesha’s names reflect shadings of multiple roles that have evolved over time. Dhavalikar ascribes the quick ascension of Ganesha in the Hindu pantheon, and the emergence of the Ganapatyas, to this shift in emphasis from vighnakartā (obstacle-creator) to vighnahartā (obstacle-averter). However, both functions continue to be vital to his character, as Robert Brown explains, “even after the Purāṇic Gaṇeśa is well-defined, in art Gaṇeśa remained predominantly important for his dual role as creator and remover of obstacles, thus having both a negative and a positive aspect

Ganesha is considered to be the Lord of letters and learning. In Sanskrit, the word buddhi is a feminine noun that is variously translated as intelligence, wisdom, or intellect. The concept of buddhi is closely associated with the personality of Ganesha, especially in the Puranic period, when many stories stress his cleverness and love of intelligence. One of Ganesha’s names in the Ganesha Purana and the Ganesha Sahasranama is Buddhipriya. This name also appears in a list of 21 names at the end of the Ganesha Sahasranama that Ganesha says are especially important. The word priya can mean “fond of”, and in a marital context it can mean “lover” or “husband”, so the name may mean either “Fond of Intelligence” or “Buddhi’s Husband”

According to Kundalini yoga, Ganesha resides in the first chakra, called Muladhara (mūlādhāra). Mula means “original, main”; adhara means “base, the foundation”. The Muladhara chakra is the principle on which the manifestation or outward expansion of primordial Divine Force rests.[95] This association is also attested to in the Ganapati Atharvashirsa. You continually dwell in the sacral plexus at the base of the spine. Thus, Ganesha has a permanent abode in every being at the Muladhara. Ganesha holds, supports and guides all other chakras, thereby “governing the forces that propel the wheel of life”

The family includes his brother Warlord Kartikeya, who is also called Subramanya, Skanda, Murugan and other names. Regional differences dictate the order of their births. In northern India, Skanda was an important martial deity from about 500 BCE to about 600 CE, when worship of him declined significantly in northern India. As Skanda fell, Ganesha rose. Several stories tell of sibling rivalry between the brothers and may reflect sectarian tensions.

Ganesha’s marital status, the subject of considerable scholarly review, varies widely in mythological stories. One pattern of myths identifies Ganesha as an unmarried brahmacari. This view is common in southern India and parts of northern India. Another pattern associates him with the concepts of Buddhi (intellect), Siddhi (spiritual power), and Riddhi (prosperity); these qualities are sometimes personified as goddesses, said to be Ganesha’s wives. He also may be shown with a single consort or a nameless servant. Another pattern connects Ganesha with the goddess of culture and the arts, Sarasvati or Śarda . He is also associated with the goddess of luck and prosperity, Lakshmi. Another pattern, mainly prevalent in the Bengal region, links Ganesha with the banana tree, Kala Bo.

The Shiva Purana says that Ganesha had two sons: Kşema (prosperity) and Lābha (profit). In northern Indian variants of this story, the sons are often said to be Śubha (auspiciouness) and Lābha.

This is a mantra from Ganapati Upanishad. One may always use it before beginning a journey, a new course in school, new career or job, or before entering into any new contract or business so that impediments are removed and your endeavor may be crowned with success.

Elephant-faced, worshipped by the existing beings, of all living beings, tasting the elephant apple (kaith) and jambolana (jamun), the son of Uma, destroyer of grief, I bow to the lotus feet of Ganesha who is Lord of all.

O Lord Ganesha of the curved trunk and massive body, the one whose splendor is equal to millions of Suns, please bless me to that I do not face any obstacles in my endeavors.

AUM SHREEM GAM SAUBHAAGYA GANPATAYE VARVARD SARVAJANM MEIN VASHAMAANYA NAMAH
By chanting this saubhagya mantra, we are asking for good fortune and blessings for our current and future life-times from Lord Ganesha. We bow in homage to Lord Ganesha who protects us with health and happiness.

AUM EKADANTAYA NAMAH
Ekadanta refers to one tusk of the elephant faced Lord Ganesha. This means God broke the duality and made you have a complete one-pointed mind. Chanting this Ganesha mantra will help in filling your mind with the feelings of oneness for a single-minded devotion.

AUM LAMBODARAYA NAMAH
This mantra means that all the celestial bodies are within an individual. Aum represents the sound of creation and the entire universe is comprised inside it. It is a suitable mantra to be chanted during Ganesh Chaturthi.

AUM VIGHNA NASHANAYA NAMAH
Lord Ganesha is believed to have the power to remove every hindrance in our life. By chanting this mantra, all impediment and blocked energy in your physical and cosmological bodies are unconfined. This is a suitable mantra for Ganesh Chaturthi.

This mantra is very suitable for chanting on Ganesh Chaturthi. Lord Ganesha is the leader of the Gana. It is believed that chanting this mantra by thinking a group of people in your mind will help in a group healing.

The word Gajakarnikaya refers to the ears of Lord Ganesha which is similar to that of an elephant. By chanting this mantra, you can tune your body with seven chakras and all 72,000 nadis, to any loka.