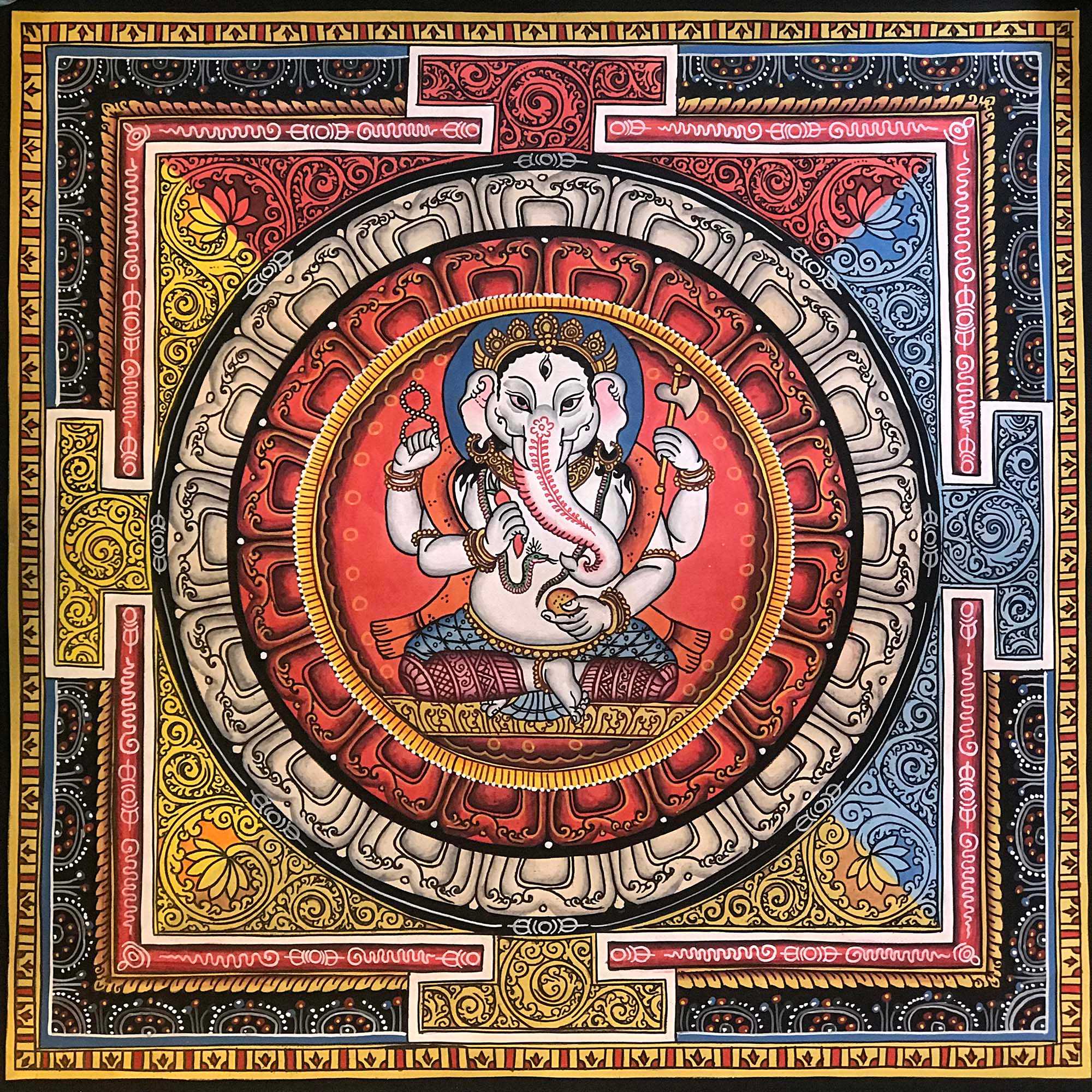 Ganesha Mandala is handpainted on cotton canvas using natural colors in the Newari style. Ganesha is Vighneshvara or Vighnaraja, the Lord of Obstacles, both of a material and spiritual order.

Ganesha Mandala is handpainted on cotton canvas using natural colors in the Newari style. Ganesha is Vighneshvara or Vighnaraja, the Lord of Obstacles, both of a material and spiritual order.

He is popularly worshipped as a remover of obstacles, though traditionally he also places obstacles in the path of those who need to be checked.

“his task in the divine scheme of things, his dharma, is to place and remove obstacles. It is his particular territory, the reason for his creation.”

Ganesh is one of the deities best-known and most widely worshiped in the Hindu pantheon. His image is found throughout India and Nepal.

Hindu sects worship him regardless of affiliations. Devotion to Ganesha is widely diffused and extends to Jains, Buddhists, and beyond India.

Ganesha has the head of an elephant and a big belly. This statue has four arms, which is common in depictions of Ganesha. He holds his own broken tusk in his lower-right hand and holds a delicacy, which he samples with his trunk, in his lower-left hand. The motif of Ganesha turning his trunk sharply to his left to taste a sweet in his lower-left hand is a particularly archaic feature. A more primitive statue in one of the Ellora Caves with this general form has been dated to the 7th century. Details of the other hands are difficult to make out on the statue shown. In the standard configuration, Ganesha typically holds an ax or a goad in one upper arm and a noose in the other upper arm.

According to Kundalini yoga, Ganesha resides in the first chakra, called Muladhara (mūlādhāra). Mula means “original, main”; adhara means “base, the foundation”. The Muladhara chakra is the principle on which the manifestation or outward expansion of primordial Divine Force rests.
This association is also attested to in the Ganapati Atharvashirsa. You continually dwell in the sacral plexus at the base of the spine. Thus, Ganesha has a permanent abode in every being at the Muladhara. Ganesha holds, supports and guides all other chakras, thereby “governing the forces that propel the wheel of life”